In 2010 they got the money to build a boarding dormitory which was their first permanent building on the high school site. As the contractors were laying the foundation, the senior and well-respected witch doctor in the community came and spoke to the contractor demanding to be given a goat before he could allow the construction work to continue.

This is how an incredible story begins about a school in Uganda. It will leave you in awe. It comes from my dear friend, Robert Sityo, whom I met in 2014 while visiting African students at Wheaton Graduate School. Robert graduated in 2016 as a Billy Graham Scholar. I have told you about him before. He is since back home with his 21 children (18 adopted and his own triplets) and deep into his leadership roles in this school and many church plants. He was in the states this summer and told this story.

Robert wrote this story out for me this second week of September 2017. I had forgotten some of the details. Isn’t it an amazing account of the power of God! By the way, Robert and his wife, Sarah tried to plant a church in this town for years without success. Then Sarah had a dream one night of starting a school instead.  God would bless the school as he would eventually build a church. There is now a thriving church in Bukeeka. After you read the story, you may want to read more.

Laying the foundation of the Fountain of Hope school

Robert continues the story, “the witch doctor threatened that if a goat is not given to him before the end of the day, the first person to go to the construction site after he left would die the next day. The contractor called me in fear and told me of how he has stopped the work until I give a goat to the witch doctor. When the witch doctor left the construction site, he went to the whole village to tell them of how I was going to die the next day if I don’t give him the goat.
When I came to the site, I was told the whole story and every one in the village was asking me to just give in and meet the demands of the witch doctor. Everyone knew that this was not a joke and I could lose my life if I didn’t meet this witch doctor’s demand.
But after hearing the whole story, I went to the construction site and prayed over it. I told everyone that I am not going to meet the witch doctor’s demand and encouraged the contractor that no one will die. Godfrey, my associate pastor and I spent that night at church praying. Early the next morning as I was leaving church to go home, I heard people moaning in the village, only to realize that the witch doctor was dead. He woke up at 5am and went to the toilet behind his house and died in the toilet.
The whole village was filled with fear because they knew why the witch doctor was dead. Being a Muslim guy, his funeral was supposed to be done on the same day. During the funeral,  a group of Muslim leaders called me aside and began to confess how they had persecuted me for the last 6 years. They apologized to me and told me of how they will not persecute me any more. They also asked me to not let anyone else die. They confessed that they now know that my God is stronger than the witch doctor’s.
The next Sunday, the first wife of the dead witch doctor and her four kids came to our church and gave their lives to Christ and are now church members since then. The kids go to Fountain of Hope schools.”

His school, Fountain of Hope, has grown from a few students in an elementary school begun by he and his wife in 2004 in a predominantly Muslim area of southern Uganda to an enrollment of 1300 students (K-12 in 2017), where about 90% of the students have become Christians since enrolling in school.  God is blessing this school and the church in this town. Watch a video in the middle of this Home page of Robert for a bigger picture of his ministry.

I’d like to give you a way to give this school a boost. They need a playground. While Robert was here, we visited a children’s ministry called Kids Around the World in Rockford, IL (my hometown). They take suburban playgrounds that are being taken down and replaced in our suburbs and rehab them and then send them overseas.  It is a great ministry. Short term mission teams may help or accompany.

Do you know there are schools around the world with hundreds of kids without any playgrounds? In our country you can find a beautiful playground made of metal every mile or so in our U.S. suburban parks and school yards. They are everywhere and so plentiful that they are often empty of the children they were designed for. Kids Around the World (KATW), has received nearly $14,000 from friends of Fountain of Hope since August. We hope you and your family will consider giving the remaining $10,000 so the kids at this school can have their first playground built on the school grounds in early 2018. Make one of these playgrounds a reality for the community of Bukeeka, Uganda. Donate by Phone or Mail at the bottom of page at Kids Around the World, designate Bukeeka, Uganda. 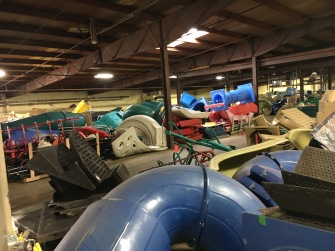 This is the warehouse where Kids Around the World stores the playgrounds waiting for their new homes.

My husband, Jim and I have been involved with school aged kids in Africa for over 40 years. We have helped find sponsors for  Hope for Life-Kenya kids to be able to finish high school and Jim has taught an AIDS prevention curriculum to school teachers all over the world. You know this is our heart if you read this blog very often. A caveat…we are very serious about which organizations we support and become involved with. Your trust in our discernment may be a way for you to enter into learning about and supporting ministries in Africa.

These darling triplets are the children of Robert and Sarah Sityo…they will enjoy this playground someday….let’s make it this coming spring. 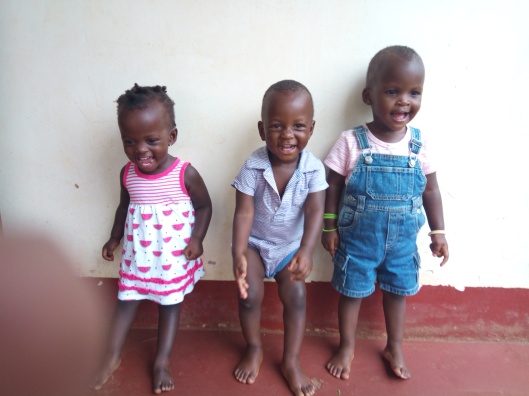 2 thoughts on “The miraculous power of God helps build a school against the witch doctor’s wishes.”