Like many boomers, Urbana had a huge impact on me.

Urbana Faces the Challenge of Calling Gen Z to Missions 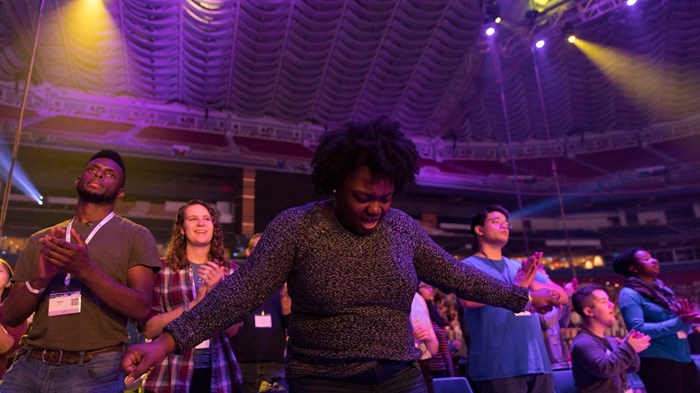 Plenty of today’s evangelical leaders look back to Urbana conferences over the years as the catalyst that drove them to ministry.

But for the shrinking crowd at InterVarsity Christian Fellowship’s (IVCF) triennial conference—held over the past few days in St. Louis—the path to the mission field appears more complicated.

The college students who attended Urbana ‘18, though passionate about Christ, hold different expectations for life after graduation, often taking longer to settle into a vocation, and carry stress over growing student debt.

“This is changing the way that InterVarsity and mission agencies are engaging with participants,” said Greg Jao, senior assistant to IVCF president Tom Lin.

“We need a longer-term strategy to help people who may make decisions about the missions field while they’re at Urbana as college students sustain their interest and commitment over the longer period of time that it takes to figure it out.”

Determining how to navigate these challenges as Generation Z enters college is crucial for ministries like Urbana. Attendance at the historic conference is down to its lowest in at least 20 years, with around 10,000 attendees in 2018, compared to 16,000 in 2015.

But the crowd and speakers were more diverse than ever, already resembling the majority-minority demographics of the next generation: 64 percent of attendees were non-white.

“At the conferences that I’ve been to that have been less diverse, I felt I was unrepresented and it was hard for me to worship well,” Daniela Bushiri, an engineering major at New Jersey Institute of Technology, told CT. “Seeing minorities on the stage means a lot because it shows us that we have a role to play in this community.”

Today’s youngest believers are more likely to find themselves as outliers for their faith. Barna Research found that while roughly 6 in 10 of Gen Z (the 70 million people born between 1999 and 2015) identify as Christian, only 1 in 11 can be characterized as an “engaged Christian,” whose beliefs and practices are shaped by their faith.

Religious and non-religious young adults alike are struggling to find hope, so leaders at Urbana are praying this generation embrace a view of the kingdom that combats their current cynicism.

“There is a lot of anger against injustices like sexism, racism, classism, privilege, and white supremacy,” said René Breuel, a Brazilian pastor in Rome, who who taught several plenary sessions. “Young people pick that up and feel that very strongly, but don’t always have a Christian vision of how the world will be mended and restored.”

The tension between the youthful perspective of 20-somethings and the sacrificial call to missions is not unique to Generation Z. Over 20 years ago, CT reported from Urbana ‘96 that their parents’ cohort also had a “shift in commitments.”

Generation X “is often characterized as one of slackers,” Urbana’s former director Dan Harrison said, citing caution over long-term commitments due to concerns about broken marriages and job security. “They’re not slackers or uncommitted at all, but they define commitment differently than I do.”

With a new generation and new challenges before them, conference organizers turned to the timeless truths of Scripture, selecting a text with a sobering understanding of reality: Revelation. Passages from the apocalyptic book were used for daily Bible studies, taught by plenary speakers, and recited in other languages including Spanish and Hawaiian.

“Revelation takes anger by hand to a place that is healing, that exalts Christ, where the nations flourish, and where we reign in serving each other under the throne of the lamb,” said Breuel. “It can be a healing experience of that anger portrayed in a good way.”

Conference sessions named and condemned injustice from the stage, including calling out atrocities committed in the name of Christ: the Rwandan genocide, Canadian residential schools that separated First Nation children from their families, and Martin Luther’s anti-Semitism.

“I did a lot of praying and asking God what he wanted me to do with my life,” said Samuel Chow, a sophomore at University of North Carolina, Chapel Hill.

“Seeing all the bad things that the church has done and the repercussions of it has led me to be more conscientious about how I convey myself as a Christian and as a child of God to others who do not know him.”

The presentations on historic injustice resonate with young people who crave transparency.

“I’ve been talking to pastors who’ve asked ‘Why are we talking about the failures of missions in the past? Why aren’t we talking more about where to go or unreached people groups?’” said IVCF’s Jao. “What I’ve wanted to say is this generation requires a level of honesty and authenticity about our failures in the past before they’re willing to embrace the future.”

The historic missions conference has also had a long history in pursuit of racial justice, beginning with evangelist Tom Skinner’s keynote at Urbana ‘70. Urbana ‘15, also held in St. Louis, spoke directly to racial tensions in the US, with members of the worship team wearing “Black Lives Matter” shirts and speakers such as Michelle Higgins challenging the evangelical response to shootings such as Michael Brown’s in nearby Ferguson, Missouri.

Some at this year’s conference speculated whether the pushback over Black Lives Matter at the last conference or an IVCF staff policy on sexuality that went into effect in 2016 hurt attendance.

Though Urbana has drawn well-known speakers from Elisabeth Elliot to David Platt in years past, the 2018 lineup focused on personal narratives over popular names.

“Each person that gets up there, you’ll hear them say, ‘This is my blank Urbana’ or ‘This is what happened to me at Urbana ’03 or ’06,’” said Steven Grahmann, IVCF’s Arizona area director. “That’s what Gen Z and millennials want to know. This person has been here. Their experience here changed them. That could happen to me.”

Students listened for perspectives that could apply to their own walk with Christ or their future vocation.

“It’s very vulnerable of them to go in stage in front of thousands of people and share a struggle that they’ve faced and a struggle they’ve gone to in their life,” said Christine Lui, a biochemistry major at University of Texas. “That really shows their heart to share who God is and what God has done for them. It makes them seem more human.”

Others told CT about rethinking ways to incorporate missions into their career fields as a result of the Urbana sessions.

Over the next couple weeks, as thousands of students will return to classrooms and campus ministries, IVCF will be left to evaluate Urbana 2018, which concludes today.

With an attendance decline of nearly a third, the organization will examine what kept students away from the event—whether shifting priorities, scheduling conflicts, or other factors. (In just a few days, the Cross Conference will take place in Louisville, Kentucky, drawing a more Reformed and Southern Baptist crowd, and featuring former Urbana speaker David Platt.)

“What we need to do after Urbana is ask the question, ‘How has the ecosystem of Christian conferences changed? Is this a shorter-term trend or a longer-term trend?,’” said Jao.

“What we do know, especially because of Revelations, is that God is sovereign. He brought these 10,000 and so that’s our focus during this week.”